I took a day off and had the BEST day!

Last week I posted that I wasn’t feeling inspired and wouldn’t be posting a blog as per the usual Monday schedule. I also said that I gave “myself permission” to do so; and guess what? It was THE BEST decision to take a day off and do whatever the f*ck I felt like doing. Being intentional with my day off allowed me the freedom to fully dive into whatever I wanted – FREE FROM JUDGEMENT! This is the key for many of us who try to take time for ourselves, yet feel guilty, selfish or not fully present because we’re not being “productive” (whatever the hell that means!).

I started the day by laying in bed for an extra hour. I just laid there, waking up slowly, thinking over whatever thoughts happened by. I played on my phone a little (after all, I had to post that I wasn’t posting for the day). I cleaned up the kitchen some. I cooked a bomb ass breakfast and made extra veggies so I could whip up another bomb ass breakfast tomorrow (and possibly a couple more days). I made a green juice. I considered getting out of the house and enjoying the sunshine. I got dressed for the day, did a little bit of makeup (which is a freaking chore these days, let me tell you!), and listened to some awesome pagan style music while getting ready. I also made a to-go glass of tea and packed my water bottle, and headed out into the world. I didn’t have a concrete plan, I just felt like getting out of the house and doing something. I ended up in this shopping center (super far away from our new house) that used to be my old stomping grounds, and paid a visit to Target and Barnes & Noble. I was aimless but having a blast! I didn’t spend much money at all (you really don’t ever have to spend money if you don’t want to), but I did pick up a couple of items. After an hour or so over there, I headed over to what I call the “fancy Kroger”. They have a decent sized bulk section AND they offer most produce w/o packaging. I really only went there to double check those 2 facts that I just stated because it’s been a long time since I was there (we moved to the country folks). I ended up getting lettuce, a ginger root and a box of wine, but I HAD THE BEST TIME!! I felt so FULL just looking at all the bulk choices and all the little mushrooms that weren’t sealed in plastic! I felt so FULL being on my own agenda, not someone else’s.

Shortly after my fancy Kroger trip, I headed back home where I ended up playing outside for a while. It’s been a crazy, unseasonal winter for Atlanta and it’s been cloudy, rainy, cold and gross since December. Now, you might be cursing at me right now or rolling your eyes, but we moved to the freaking south for a reason. If I wanted “normal” winter, I’d be back in CO. (Actually, that’s not totally true, I honestly LOVE winter and snow and I’m one of those freaks who doesn’t mind driving in the snow – minus all the other drivers that is. But still, I live in Atlanta, I didn’t sign up for winter!) I digress. My point being, it was actually really nice outside. I turned our heat down and opened a ton of windows and headed out back. Being the nature loving, tree hugging hippie that I am, I gathered a bunch of fallen sticks of all sizes (I also said “thank you” and gave an offering to the forest), and started “cleaning” them up by removing extra branches and things so I could use them in craft work. Look at what I made!

A centerpiece in honor of the resting period we call winter

I also decided to work on these roses and flowers I had hanging up for the last week, to dry them out further. I’m going to turn them into a floral bath tea when it’s all said & done (they’re not organic though, so I won’t be selling them). I feel like a freaking herbologist! [Disclaimer: yes, I am aware that’s not a real word according to muggles, but I’m not a muggle and we study herbology! So there! (Extra disclaimer: if you have no idea what I just said, please refer to this link and know that I was kidding just now.)]

After playing plant lady, I was the lucky recipient of some powerful, distance reiki from my own Reiki Master, my mom, and one of her students. I cannot tell you how amazing it is to receive reiki (if you’ve never experienced it yourself), and here’s a completely shameless plug: I OFFER REIKI!! In person or via long distance. Contact me for details! Here’s how I felt afterwards:

Image courtesy of the Google

I also talked on the phone with a very dear friend of mine, ate mindfully all day and made sure I drank enough water. I also got to spend some quality time with my hubby wubby once he came home from work and I folded two loads of laundry. I’m not even mad that I did chores.

Because everything I did, I did with intent.

So what’s the moral of this story? TAKE A FREAKING DAY OFF PEOPLE! You’ll thank me later.

Sending you all the love.

5 Simple ways to take care of your feet

Want to Raise your Vibration in 2018?

REGISTRATION IS CLOSED! but feel free to read this blog anyway... Have you ever wondered…

As I write this blog post, it's a gorgeous Sunday afternoon. The weather is sunny,… 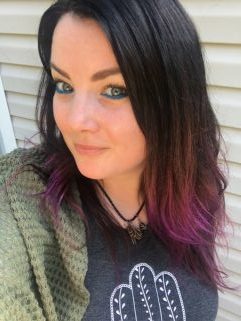 My name is Stephani and I’m the creator behind Sage & Crow.

Read More about me >